In 2020 we released our first public data file, something we’ve turned into an annual affair supporting our commitment to the Principles of Open Scholarly Infrastructure (POSI). We’ve just posted the 2022 file, which can now be downloaded via torrent like in years past. We aim to publish these in the first quarter of each year, though as you may notice, we’re a little behind our intended schedule. The reason for this delay was that we wanted to make critical new metadata fields available, including resource URLs and titles with markup.

Unfortunately, Bryan Vickery has moved onto pastures new. I would like to thank him for his many contributions at Crossref and we all wish him well. I’m now pleased to announce that Rachael Lammey will be Crossref’s new Director of Product starting on Monday, May 16th. Rachael’s skills and experience are perfectly suited for this role. She has been at Crossref since 2012 and has deep knowledge and experience of all things Crossref: our mission; our members; our culture; and our services.

Since we announced last September the launch of a new version of iThenticate, a number of you have upgraded and become familiar with iThenticate v2 and its new and improved features which include: A faster, more user-friendly and responsive interface A preprint exclusion filter, giving users the ability to identify content on preprint servers more easily A new “red flag” feature that signals the detection of hidden text such as text/quotation marks in white font, or suspicious character replacement A private repository available for browser users, allowing them to compare against their previous submissions to identify duplicate submissions within your organisation A content portal, helping users check how much of their own published content has been successfully indexed, self-diagnose and fix the content that has failed to be indexed in iThenticate.

A re-cap We kicked off our Ambassador Program in 2018 after consultation with our members, who told us they wanted greater support and representation in their local regions, time zones, and languages. We also recognized that our membership has grown and changed dramatically over recent years and that it is likely to continue to do so. We now have over 16,000 members across 140 countries. As we work to understand what’s to come and ensure that we are meeting the needs of such an expansive community, having trusted local contacts we can work closely with is key to ensuring we are more proactive in engaging with new audiences and supporting existing members.

Remember when I said that the Wikipedia was the 8th largest referrer of DOI links to published research? This despite only a fraction of eligible references in the free encyclopaedia using DOIs.

We aim to fix that. Crossref and Wikimedia are launching a new initiative to better integrate scholarly literature in the world’s largest public knowledge space, Wikipedia.

This work will help promote standard links to scholarly references within Wikipedia, which persist over time by ensuring consistent use of DOIs and other citation identifiers in Wikipedia references. Crossref will support the development and maintenance of Wikipedia’s citation tools on Wikipedia. This work will include bug fixes and performance improvements for existing tools, extending the tools to enable Wikipedia contributors to more easily look up and insert DOIs, and providing a “linkback” mechanism that alerts relevant parties when a persistent identifier is used in a Wikipedia reference.

In addition, Crossref is creating the role of Wikimedia Ambassador (modeled after Wikimedian-in-Residence) to act as liaison with the Wikimedia community, promote use of scholarly references on Wikipedia, and educate about DOIs and other scholarly identifiers (ORCIDs, PubMed IDs, DataCite DOIs, etc) across Wikimedia projects.

Starting today, Crossref will be working with Daniel Mietchen to coordinate Crossref’s Wikimedia-related activities. Daniel’s team will be composed of Max Klein and Matt Senate, who will work to enhance Wikimedia citation tools, and will share the role of Wikipedia ambassador with Dorothy Howard.

Since the beginnings of Wikipedia, Daniel Mietchen has worked to integrate scholarly content into Wikimedia projects. He is part of an impressive community of active Wikipedians and developers who have worked extensively on linking Wikipedia articles to the formal literature and other scholarly resources. We’ve been talking to him about this project for nearly a year, and are happy to finally get it off the ground. 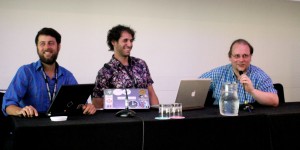