Frankfurt Book Fair (#FBM20) will be online this year since people are really not traveling right now.  This special edition of #FBM20 will have an extensive digital program in which we will be participating. So you can hang out with us from anywhere in the world!

Publishers, are you ready to ROR?

If you manage a publishing system or workflow, you know how crucial—and how challenging!—it is to have clean, consistent, and comprehensive affiliation metadata. Author affiliations, and the ability to link them to publications and other scholarly outputs, are vital for numerous stakeholders across the research landscape. Institutions need to monitor and measure their research output by the articles their researchers have published. Funders need to be able to discover and track the research and researchers they have supported.

Evolving our support for text-and-data mining

Many researchers want to carry out analysis and extraction of information from large sets of data, such as journal articles and other scholarly content. Methods such as screen-scraping are error-prone, place too much strain on content sites and may be unrepeatable or break if site layouts change. Providing researchers with automated access to the full-text content via DOIs and Crossref metadata reduces these problems, allowing for easy deduplication and reproducibility. Supporting text and data mining echoes our mission to make research outputs easy to find, cite, link, assess, and reuse.

Crossref’s Similarity Check service is used by our members to detect text overlap with previously published work that may indicate plagiarism of scholarly or professional works. Manuscripts can be checked against millions of publications from other participating Crossref members and general web content using the iThenticate text comparison software from Turnitin.

So, back on the old XMP tack. The simple vision from the XMP spec is that XMP packets are embedded in media files and transported along with them - and as such are relatively self-contained units, see Fig 1.

But this is too simple. Some preliminary considerations lead us to to see why we might want to reference additional (i.e. external) sources of metadata from the original packet:

Thus the two cases - PDF documents and images - are not dissimilar. Fig. 2 shows a “wall-to-wall” XMP architecture whereby the standalone metadata documents for the work and for additional sources are expressed in XMP. 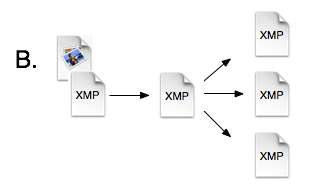 Fig. 3 presents a variant on this theme whereby additional sources are presented as generic RDF/XML. (In the most general case only RDF need be assumed, the serialization being a matter of choice.) 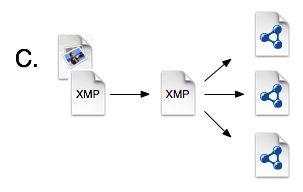 If I were to choose I might opt for the scenario presented in Fig. 3, but the scenarios in both Figs. 2 and 4 leave room for thought. Such a hybrid solution may be a means to bridge two different concerns:

Publishers, are you ready to ROR?

Evolving our support for text-and-data mining