2020 wasn’t all bad. In April of last year, we released our first public data file. Though Crossref metadata is always openly available––and our board recently cemented this by voting to adopt the Principles of Open Scholarly Infrastructure (POSI)––we’ve decided to release an updated file. This will provide a more efficient way to get such a large volume of records. The file (JSON records, 102.6GB) is now available, with thanks once again to Academic Torrents.

Our colleague and friend, Kirsty Meddings, passed away peacefully on 10th December at home with her family, after a sudden and aggressive cancer. She was a huge part of Crossref, our culture, and our lives for the last twelve years. Kirsty Meddings is a name that almost everyone in scholarly publishing knows; she was part of a generation of Oxford women in publishing technology who have progressed through the industry, adapted to its changes, spotted new opportunities, and supported each other throughout.

Matching (or resolving) bibliographic references to target records in the collection is a crucial algorithm in the Crossref ecosystem. Automatic reference matching lets us discover citation relations in large document collections, calculate citation counts, H-indexes, impact factors, etc. At Crossref, we currently use a matching approach based on reference string parsing. Some time ago we realized there is a much simpler approach. And now it is finally battle time: which of the two approaches is better?

In reference matching, on the input we have a bibliographic reference. It can have the form of an unstructured string, such as:

The input can also have the form of a structured reference, such as (BibTex format):

The goal of matching is to find the document, which the input reference points to.

Matching references is not a trivial task even for a human, not to mention the machines, which are still a bit less intelligent than us (or so they want us to believe…). A typical meta-approach to reference matching might be to score the similarity between the input reference and the candidate target documents. The document most similar to the input is then returned as the target.

Of course, still a lot can go wrong here. We can have more than one potential target record with the same score (which one do we choose?). We can have only documents with low to medium scores (is the actual target even present in our collection?). We can also have errors in the input string (are the similarity scores robust enough?). Life’s tough!

The main problem with this approach is that it requires a structured reference, and in practise, often all we have is a plain reference string. In such a case we need to extract the metadata fields from the reference string (this is called parsing). Parsing introduces errors, since no parser is omniscient. The errors propagate further and affect the scoring… you get the picture.

Luckily, as we have known for some time now, this is not the only approach. Instead of comparing structured objects, we could calculate the similarity between them using their unstructured textual form. This effectively eliminates the need for parsing, since the unstructured form is either already available on the input or can be easily generated from the structured form.

What about the similarity scores? We already know a powerful method for scoring the similarities between texts. Those are (you guessed it!) scoring algorithms used by search engines. Most of them, including Crossref’s, do not need a structured representation of the object, they are perfectly happy with just a plain text query.

So all we need to do is to pass the original reference string (or some concatenation of the reference fields, if only a structured reference is available) to the search engine and let it score the similarity for us. It will also conveniently sort the results so that it is easy to find the top hit.

So far so good. But which strategy is better? Is it better to develop an accurate parser, or just rely on the search engine? I don’t feel like guessing. Let’s try to answer this using (data) science. But first, we need to decompose our question into smaller pieces.

Question 1. How can I measure the quality of a reference matcher?

When I say “documents”, I really mean “target documents”:

We decided to look at links from the target document’s perspective, because this is what the academic world cares about (i.e. how accurate the citation counts of academic papers are).

Calculating separate numbers for individual documents and averaging them within a dataset is the best way to have reliable confidence intervals (which makes the whole analysis look much smarter!).

Question 2. Which approaches should be compared?

The first approach, called the legacy approach, is the approach currently used in Crossref ecosystem. It uses a parser and matches the extracted metadata fields against the records in the collection.

The second approach is the search-based matching (SBM) with a simple threshold. It queries the search engine using the reference string and returns the top hit from the results, if its relevance score exceeds the threshold.

The third approach is the search-based matching (SBM) with a normalized threshold. Similarly as in the simplest SBM, in this approach we query the search engine using the reference string. In this case the first hit is returned if its normalized score (the score divided by the reference length) exceeds the threshold.

Finally, the fourth approach is a variation of the search based matching, called search-based matching with validation (SBMV). In this algorithm we use additional validation procedure on top of SBM. First, SBM with a normalized threshold is applied and the search results with the scores exceeding the normalized threshold are selected as candidate target documents. Second, we calculate validation similarity between the input string and each of the candidates. This validation similarity is based on the presence of the candidate record’s metadata fields (year, volume, issue, pages, the last name of the first author, etc.) in the input reference string, as well as the relevance score returned by the search engine. Finally, the most similar candidate is returned as the final target document, if its validation similarity exceeds the validation threshold.

By adding the validation stage to the search-based matching we make sure that the same bibliographic numbers (year, volume, etc.) are present in both the input reference and the returned document. We also don’t simply take the first result, but rather use this validation similarity to choose from results scored similarly by the search engine.

All the thresholds are parameters which have to be set prior to the matching. The thresholds used in these experiments were chosen using a separate dataset, as the values maximizing the F1 of each algorithm.

Question 3. How to create the dataset?

We could try to calculate our metrics for every single document in the system. Since we currently have over 100M of them, this would take a while, and we already felt impatient…

A faster strategy was to use sampling with all the tools statistics was so generous to provide. And this is exactly what we did. We used a random sample of 2500 items from our system, which is big enough to give reliable results and, as we will see later, produces quite narrow confidence intervals.

Apart from the sample, we needed some input reference strings. We generated those automatically by formatting the metadata of the chosen items using various citation styles. (Similarly to what happens when you automatically format the bibliography section for your article. Or at least we hope you don’t produce those reference strings manually…)

For each record in our sample, we generated 11 citation strings, using the following styles:

Some styles include the DOI in the reference string. In such cases we stripped the DOI from the string, to make the matching problem non-trivial.

An ideal matching algorithm will match every generated string to the record it was generated from. In practise, some of the expected matches will be missing, which will lower the recall of the tested matching approach. On the other hand, it is very probable that we will get the precision of 100%. To have the precision lower than 100%, we would have to have some unexpected matches to our sampled documents, which is unlikely. This is obviously not great, because we are missing a very important piece of information.

For each sampled document I added up to 2 similar documents (I used, surprise surprise, our search engine to find the most similar documents). I ended up with 7,374 items in total (2,500 originally sampled and 4,874 similar items). For each item, 11 different reference strings were generated. Each reference string was then matched using the tested approaches and I could finally look at some results. 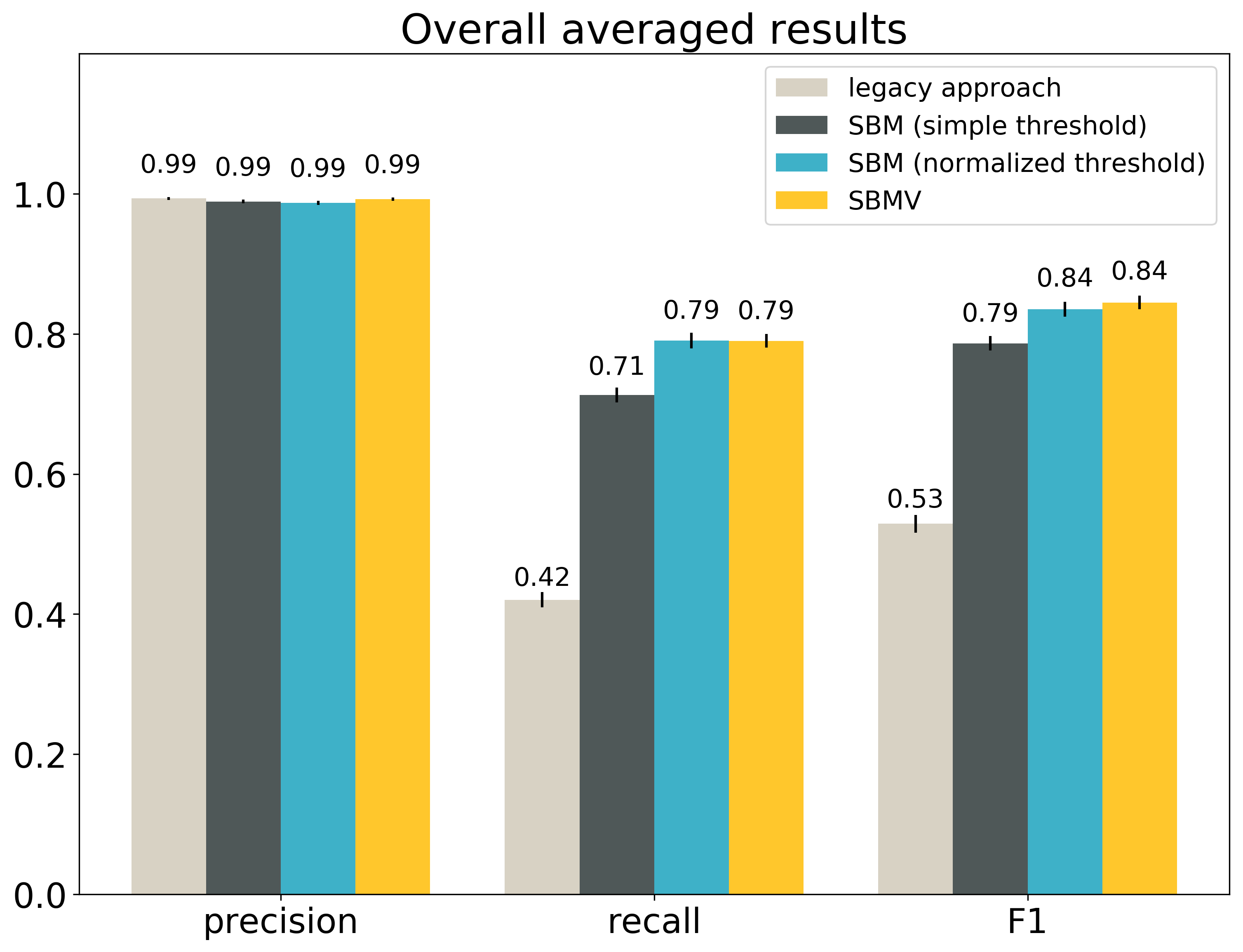 The confidence intervals given in the table are the ranges, in which it is 95% likely to have the real average precision, recall and F1. For example, we are 95% sure that the real F1 for SBMV in our entire collection is within the range 0.8352 - 0.8544.

As we can see, each metric has a different winner.

SBM with a normalized threshold is the best in recall. This suggests that it is fairly tolerant and returns a lot of matches, which might also result in returning more incorrect matches (false positives). Also in this case the difference between the winner and the second best (SBMV) is not statistically significant.

SBMV is the best in F1. This shows that this approach balances precision and recall the best, despite being only the second best in both of those metrics. According to the paired Student’s t-test, the difference between SBMV and the second best approach (SBM with a normalized threshold) is statistically significant.

All variants of the search-based matching outperform the parsing-based approach in terms of F1, with statistically significant differences. This shows that in search based-matching it is possible to keep precision almost as good as in the legacy approach, and still include many more true positives.

Let’s also look at the same results split by the citation style: 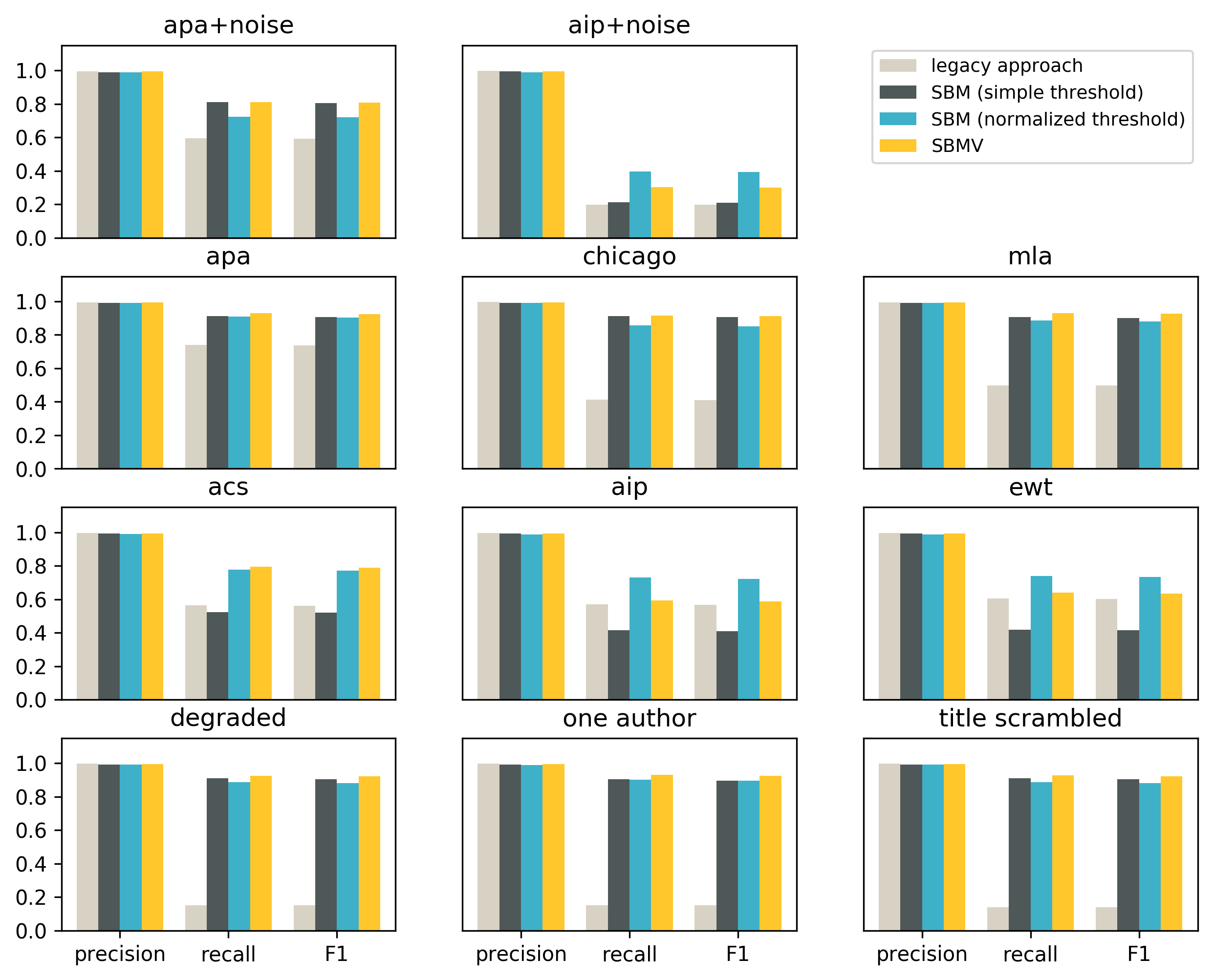 For all styles the precision values are very high, and the legacy approach is slightly better than all variations of the search-based approach.

SBM with a normalized threshold and SBMV is better than the legacy approach in recall and F1 for all 11 styles.

The weak spot of the legacy approach is degraded and noisy reference strings, which do not appear to use any of the known citation styles.

The weak spot of the search-based matching is short reference strings, and in particular citation styles that do not include the title in the string.

The limitations are related mostly to the method of building the dataset.