Event Data is our service to capture online mentions of Crossref records. We monitor data archives, Wikipedia, social media, blogs, news, and other sources. Our main focus has been on gathering data from external sources, however we know that there is a great deal of Crossref metadata that can be made available as events. Earlier this year we started adding relationship metadata, and over the last few months we have been working on bringing in citations between records.

Come and get your grant metadata!

Tl;dr: Metadata for the (currently 26,000) grants that have been registered by our funder members is now available via the REST API. This is quite a milestone in our program to include funding in Crossref infrastructure and a step forward in our mission to connect all.the.things. This post gives you all the queries you might need to satisfy your curiosity and start to see what’s possible with deeper analysis. So have the look and see what useful things you can discover.

Update on the outage of October 6th. In my blog post on October 6th, I promised an update on what caused the outage and what we are doing to avoid it happening again. This is that update. Crossref hosts its services in a hybrid environment. Our original services are all hosted in a data center in Massachusetts, but we host new services with a cloud provider. We also have a few R&D systems hosted with Hetzner.

Looking at the road ahead, we’ve set some ambitious goals for ourselves and continue to see new members join from around the world, now numbering 16,000. To help achieve all that we plan in the years to come, we’ve grown our teams quite a bit over the last couple of years, and we are happy to welcome Carlos, Evans, Fabienne, Mike, Panos, and Patrick.

Metadata in PDF: 2. Use Cases

Well, this is likely to be a fairly brief post as I’m not aware of many use cases of metadata in PDFs from scholarly publishers. Certainly, I can say for Nature that we haven’t done much in this direction yet although are now beginning to look into this.

I’ll discuss a couple cases found in the wild but invite comment as to others’ practices. Let me start though with the CNRI handle plugin demo for Acrobat which I blogged here.

Just announced on the handle-info list is a new plugin from CNRI for Acrobat Reader - see here. The announcement says: _“It is intended to demonstrate the utility of embedding a identifying handle in a PDF document.   …   A set of demonstration documents, each with an embedded identifying handle, is packaged with the plug-in to show potential uses.

(Update - 2007.07.28: I meant to reference in this entry Pierre Lindenbaum’s post back in May Is there any XMP in scientific pdf ? (No), which btw also references Roderic Page’s post on XMP but forgot to add in the links in my haste to scoot off. Well, truth is we still can’t answer Pierre in the affirmative but at least we can take the first steps towards rectifying this.)

I’ve been revisiting Adobe’s XMP just recently. (I blogged here about the new XMP Toolkit 4.1 back in March.)

I wanted to share some of my early experiences. First off, after a couple of previous attempts which got pushed aside due to other projects, I managed to compile the libraries and the sample apps that ship with the C++ SDK under Xcode on the Mac. I also needed to compile Expat first which doesn’t ship with the distribution.

OK, so far, so good. What this basically leaves one with is a couple of XMP dump utilities (DumpMainXMP and DumpScannedXMP) and two others (XMPCoreCoverage and XMPFilesCoverage) which is a good start anyways for exploring. And turns out that our PDFs already have some workflow metadata in them. This is encouraging because the SDK allows apps to read and update existing XMP packets from files, though not to write new packets into files (as far as I understand).

I thought I would take this opportunity anyway to:

We updated our Project Prospect articles today to release v1.1, with a pile of look � feel improvements to the HTML views and links. The most interesting technical addition is the launch of our enhanced RSS feeds, where we have updated our existing feeds for enhanced articles. These now include ontology terms and primary compounds both visually (as text terms and 2D images) and within the RDF - using the OBO in OWL representation and the info:inchi specification mentioned here by Tony only a few weeks ago.

The enhanced entries will soon become more common as we concentrate our enhancements on our Advance Articles, but the current example below from our Photochemical and Photobiological Sciences feed is lovely. RDF code after the jump - just as beautiful to the parents… 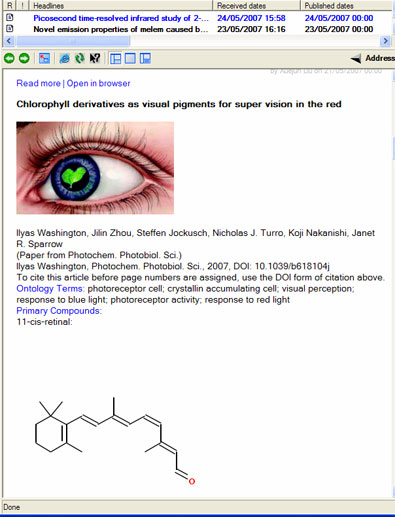 This post on Adobe’s Creative Solutions PR blog may be worth a gander: _“This new update, the Adobe XMP 4.1, provides new libraries for developers to read, write and update XMP in popular image, document and video file formats including: JPEG, PSD, TIFF, AVI, WAV, MPEG, MP3, MOV, INDD, PS, EPS and PNG. In addition, the rewritten XMP 4.1 libraries have been optimized into two major components, the XMP Core and the XMP Files.

Use of PRISM in RSS

Was rooting around for some information and stumbled across this page which may be of interest: http://googlereader.blogspot.com/2006/08/namespaced-extensions-in-feeds.html Namespaced Extensions in Feeds Thursday, August 03, 2006 posted by Mihai Parparita “I wrote a small MapReduce program to go over our BigTable and get the top 50 namespaces based on the number of feeds that use them.” Seems quite an impressive percentage for PRISM.

A new version of the AdsML Framework 2.0, Release 8 from the AdsML Consortium is now available for download from http://www.adsml.org/2006/announcements/adsml-framework-2-0-release-8-issued/.

Below is an extract from the “Vision” document which outlines the broad goals of AdsML.

Come and get your grant metadata!